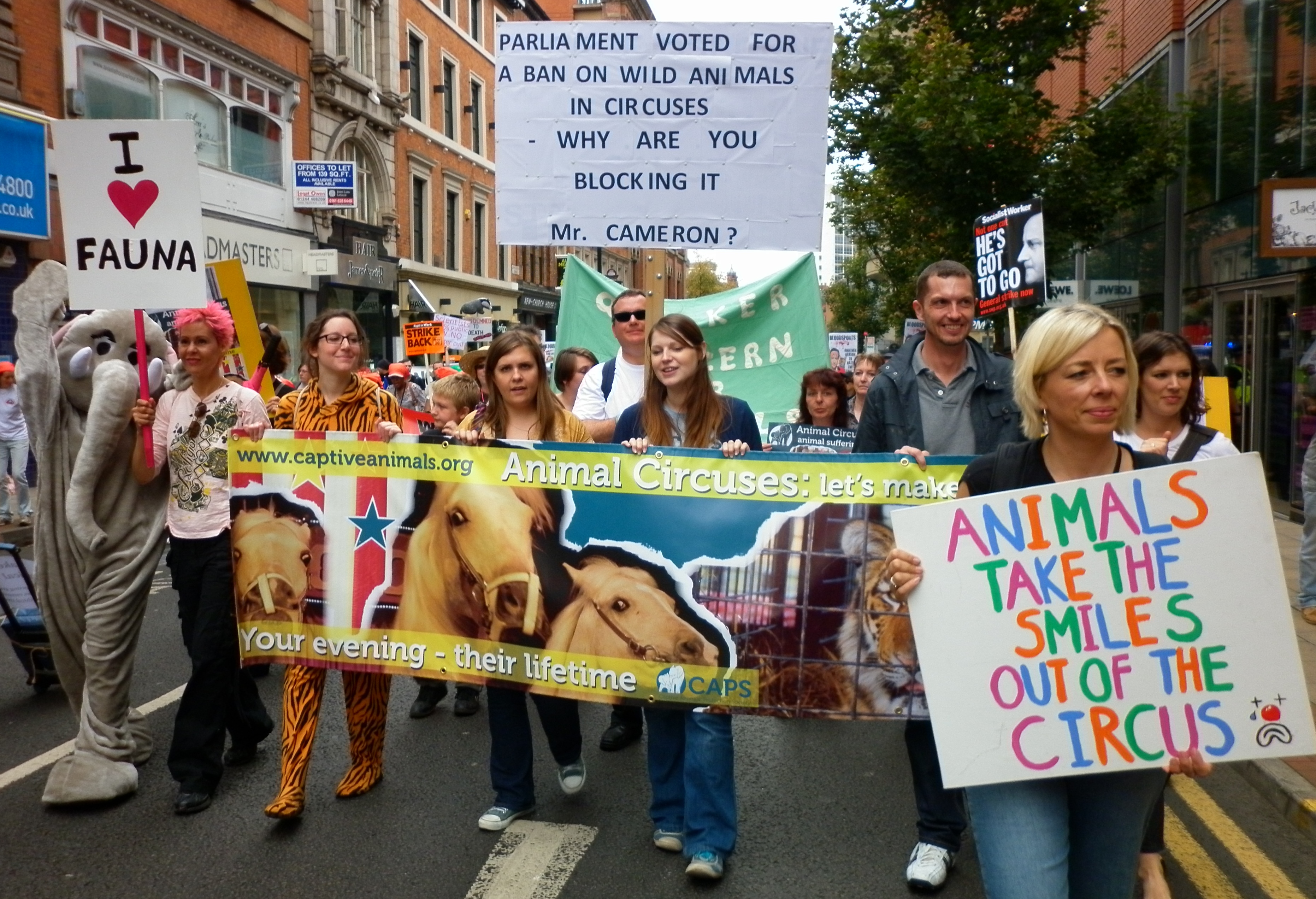 “Will Animal Rights please move to the back“. Yes that is how animal rights is viewed, I had to laugh out loud!

That really was the announcement as we, a smallish group of animal altruists were waiting to start our march on Liverpool Street outside the magnificant museum of manchester science and industry, calling on the Government to put the animals in circus ban into effect.

So at the back of 35 thousand people were about 200 animal altruists who all had their different animal rights mantra. I have to say that it appeared we were the most passionate and consistently loudest during the 2 hour march through the city centre of my beloved and great Manchester. It wasn’t a carnival atmosphere at the back even though there were random people cycling around with loud PA systems playing a mixture of laidback reggae and militant songs… no we were showing images of animal abuse and audio of a fox being killed by dogs and that is never anything to party about is it?

So as the march went on and on my feelings about what I was marching for became hedonistic and I realised I was truly doing this for all the ultra-bullied animals and that gave me an incredible sense of victory. Just being there with my 10 year old ‘mini-me’ I felt completely enveloped with like-minded people all of whom obviously and passionately loved animals as much as I did and who I viewed as Animal Altruists.

I wanted to find out why we do this so I asked Liz Tyson Director at Captive Animals’ Protection Society about the march and events leading up to it. 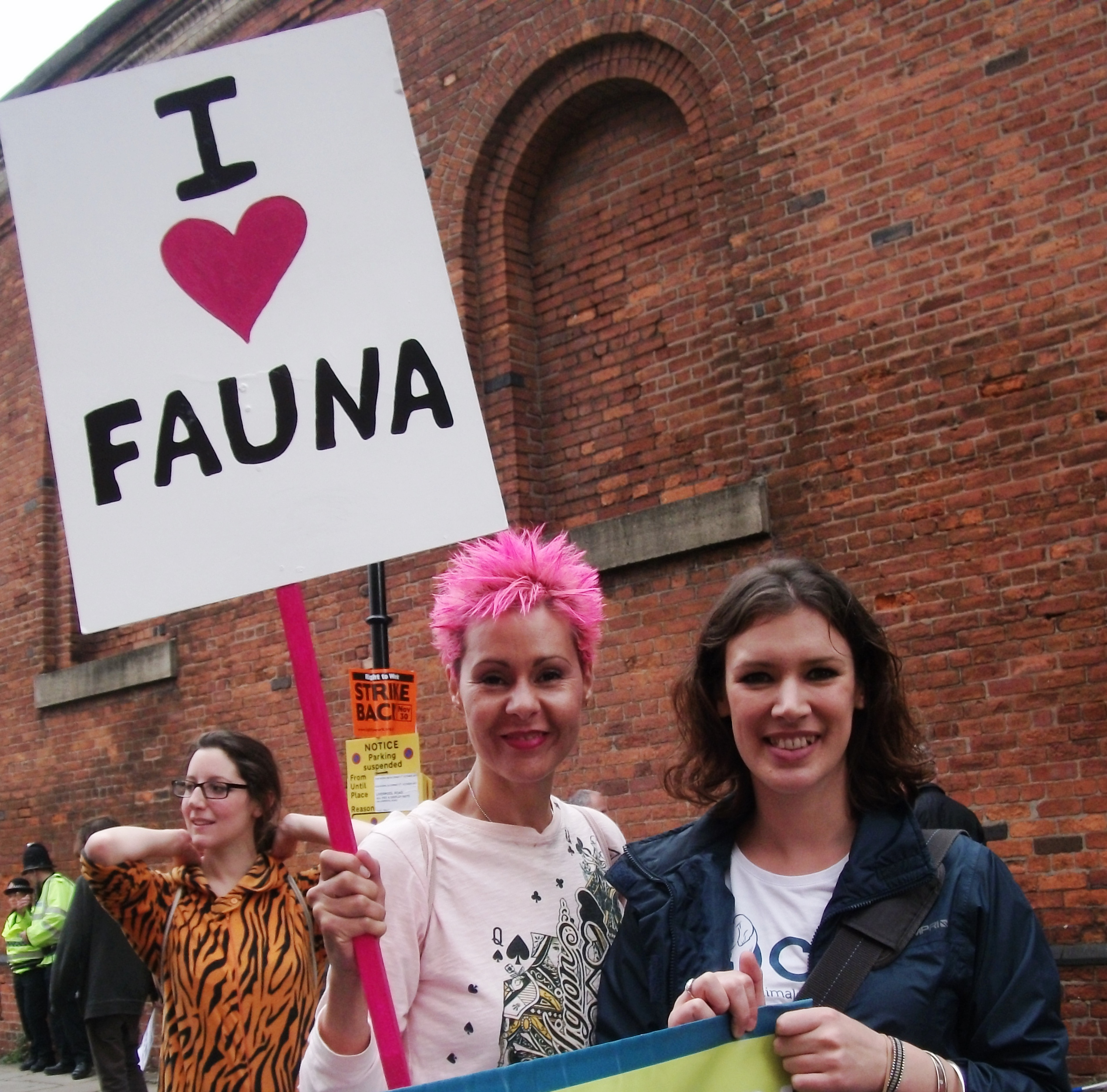 “Having worked so hard over the years to see a ban brought in on the archaic practice of exploiting animals in circuses, we all felt that we had reached a true victory as we saw MPs move to support a ban before the summer.

But our victory was short-lived as Defra appears to be pressing ahead with regulation. Regulation is not an option if the aim is to protect animals from further suffering. All regulation will do is legitimise a practice which is no longer accepted by the public, the experts or the politicians.

Only a ban will do. With the success of the campaign earlier in the year, people have been lulled into a false sense of security – just this week we attended the Labour Party Conference and were congratulated by many people who believe a ban is imminent. We need to demonstrate to the Government that we will continue to put pressure on ministers until they do the right thing. It is time for a ban on wild animals in circuses“

So we marched on the Conservative conference and shouted our cause a short clip on my YT channel shows us demonstrating at the Gmex http://bit.ly/qJBXYv

Whether or not any of the Tories heard or what we were asking for impacted on them who knows, but I am sure that the victory was ours anyway as we came out on a Sunday to represent our fauna brethern in a show of animal altruism and as we left to meet in the Quakers Meeting House behind Central Library we all had a sense of wellbeing and pumped full of positive endorphines.

We sat chatting in the Meeting House it was evident that people felt elated. The cups of tea and coffee and vegan cakes provided by CAPS were our reward for an afternoon’s hard work. 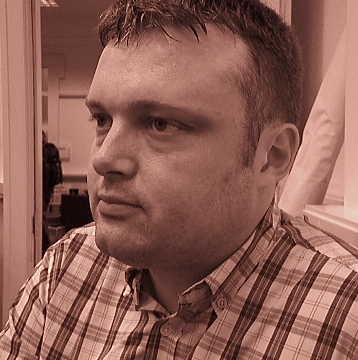 I got chatting to Kev and he gave me the following short interview which you can see on YouTube at http://bit.ly/pHjQQp

What Kev made apparent is that to be truly helpful to the animal rights cause one has to be fully on board wanting change for the ‘unheard’ and Kev was so determined to see a ban on animals being abused in the circus that he down from Yorkshire  to march for the first time in 6 years with CAPS.

Everyone I spoke to and observed looked like real human beings to me, they cared about abused animals, and gave a voice to animal suffering.

In my eyes every single animal rights person showed true animal altruism and understanding on Sunday and I ask the Universe to bless you, even if we were sent to the back of the queue =:)

BTW … there are more images from Sunday found in Pictures.